Dynamics of shoreface-connected and inactive sand ridges on a shelf, Part 2: The role of sea level rise and associated changes in shelf geometry 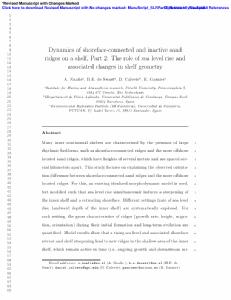 Garnier, Roland Charles
Document typeArticle
Rights accessOpen Access
Abstract
Many inner continental shelves are characterized by the presence of large rhythmic bedforms, such as shoreface-connected ridges and the more offshore located sand ridges, which have heights of several meters and are spaced several kilometers apart. This study focuses on explaining the observed orientation difference between shoreface-connected sand ridges and the more offshore located ridges. For this, an existing idealized morphodynamic model is used, but modified such that sea level rise simultaneously induces a steepening of the inner shelf and a retreating shoreface. Different settings (rate of sea level rise; landward depth of the inner shelf) are systematically explored. For each setting, the gross characteristics of ridges (growth rate, height, migration, orientation) during their initial formation and long-term evolution are quantified. Model results show that a rising sea level and associated shoreface retreat and shelf steepening lead to new ridges in the shallow area of the inner shelf, which remain active in time (i.e. ongoing growth and downstream migration in time). Old ridges that were already formed in the antecedent area of the shelf and which in the course of time experience deeper water become less active with the rising sea level. In the case that migration of the offshore parts of the ridges vanishes, these parts change orientation to become more shore-parallel compared with the active onshore parts of these ridges. In the case of small landward depths of the inner shelf and a decreasing rate of sea level rise, the active onshore parts migrate too fast, thereby causing the drowned offshore parts to detach and to become inactive. The characteristics of modeled shore-oblique shoreface-connected and more parallel offshore located ridges agree with those of observed sand ridges.
CitationNnafie, A. [et al.]. Dynamics of shoreface-connected and inactive sand ridges on a shelf, Part 2: The role of sea level rise and associated changes in shelf geometry. "Continental shelf research", Agost 2015, vol. 104, p. 63-75.
URIhttp://hdl.handle.net/2117/28309
DOI10.1016/j.csr.2015.05.009
ISSN0278-4343
Publisher versionhttp://www.sciencedirect.com/science/article/pii/S0278434315001405
Collections
Share: