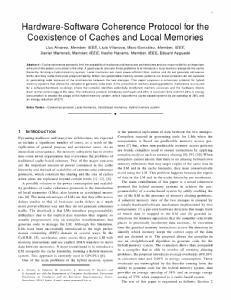 Document typeArticle
Rights accessOpen Access
Abstract
Cache coherence protocols limit the scalability of multicore and manycore architectures and are responsible for an important amount of the power consumed in the chip. A good way to alleviate these problems is to introduce a local memory alongside the cache hierarchy, forming a hybrid memory system. Local memories are more power-efficient than caches and do not generate coherence traffic, but they suffer from poor programmability. When non-predictable memory access patterns are found, compilers do not succeed in generating code because of the incoherence between the two storages. This paper proposes a coherence protocol for hybrid memory systems that allows the compiler to generate code even in the presence of memory aliasing problems. Coherence is ensured by a software/hardware co-design where the compiler identifies potentially incoherent memory accesses and the hardware diverts them to the correct copy of the data. The coherence protocol introduces overheads of 0.26% in execution time and of 2.03% in energy consumption to enable the usage of the hybrid memory system, which outperforms cache-based systems by an speedup of 38% and an energy reduction of 27%.
CitationÁlvarez, L. [et al.]. Hardware-software coherence protocol for the coexistence of caches and local memories. "IEEE transactions on computers", 01 Gener 2015, vol. 64, núm. 1, p. 152-165.
URIhttp://hdl.handle.net/2117/28300
DOI10.1109/TC.2013.194
ISSN0018-9340
Publisher versionhttp://ieeexplore.ieee.org/xpl/articleDetails.jsp?reload=true&arnumber=6616543
Collections
Share: