Snow bands over the Gulf of Finland in wintertime 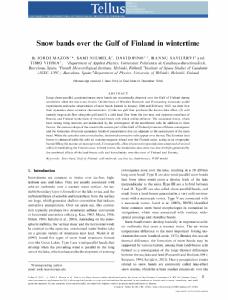 Large shore-parallel, quasi-stationary snow bands are occasionally observed over the Gulf of Finland during wintertime when the sea is not frozen. On the basis of Weather Research and Forecasting mesoscale model experiments and radar observations of snow bands formed in January 2006 and February 2012, we show that their dynamics share common characteristics: (1) the sea gulf that produces the known lake effect, (2) cold easterly large-scale flow along the gulf and (3) a cold local flow from the two near and opposite coastlines of Estonia and Finland in the form of two land-breeze cells which collide offshore. The associated fronts, which have strong rising motions, are maintained by the convergence of the land-breeze cells. In addition to these factors, the concave shape of the coast in the eastern part of the Gulf of Finland promotes offshore convergence and the formation of several secondary bands of precipitation that are adjacent to the eastern part of the main band. When the easterlies turn to southerlies, horizontal convective rolls appear over the sea. The Estonian land breeze is enhanced while the cold air remains stagnant inland over the Finnish coast, acting as an orographic barrier lifting the marine air mass upwards. Consequently, a line of convective precipitation composed of several cells is formed along the Finnish coast. In both events, the simulations also show two low-level jets generated by the combined effects of the land-breeze cells and baroclinicity over the coast of Finland and Estonia.
CitationMazon, J. [et al.]. Snow bands over the Gulf of Finland in wintertime. "Tellus. Series A, dynamic meteorology and oceanography", 16 Gener 2015, núm. 67, p. 25102-25116.
URIhttp://hdl.handle.net/2117/28255
DOI10.3402/tellusa.v67.25102
ISSN0280-6495
Publisher versionhttp://www.tellusa.net/index.php/tellusa/article/view/25102