An exact algorithm for the mixed-model level scheduling problem 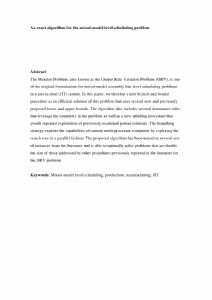 Document typeArticle
PublisherTaylor & Francis
Rights accessOpen Access
Abstract
The Monden Problem, also known as the Output Rate Variation Problem, is one of the original formulations for mixed-model assembly line-level scheduling problems in a just-in-time system. In this paper, we develop a new branch-and-bound procedure for the problem that uses several new and previously proposed lower and upper bounds. The algorithm also includes several dominance rules that leverage the symmetry in the problem as well as a new labelling procedure that avoids repeated exploration of previously examined partial solutions. The branching strategy exploits the capabilities of current multiprocessor computers by exploring the search tree in a parallel fashion. The algorithm has been tested on several sets of instances from the literature and is able to optimally solve problems that are double the size of those addressed by other procedures previously reported in the literature.
CitationPereira, J.; Vila, M. An exact algorithm for the mixed-model level scheduling problem. "International Journal of Production Research", 05 Febrer 2015.
URIhttp://hdl.handle.net/2117/28209
DOI10.1080/00207543.2015.1005771
ISSN0020-7543
Publisher versionhttp://www.tandfonline.com/doi/abs/10.1080/00207543.2015.1005771#.VNjoFy4k03A
Collections
Share: