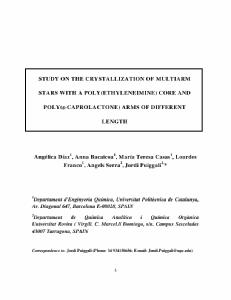 Study on the crystallization of multiarm stars with a poly(ethyleneimine) core and poly(epsilon-caprolactone) arms of different length. (1,862Mb)
Share:

Document typeArticle
Rights accessOpen Access
Abstract
Crystallization of multiarm star systems constituted by a core of poly(ethyleneimine) (PEI) and arms of poly(epsilon-caprolactone) (PCL) was studied by transmission electron microscopy, calorimetry and optical microscopy techniques. Three systems differing on the degree of polymerization of PCL were studied as well as binary mixtures constituted by systems differing on the length of PCL arms. Samples were able to crystallize from both diluted solutions and the melt state giving rise to well-formed lamellae and spherulites, respectively. Lamellae of samples with large PCL arms were highly regular and corresponded to elongated hexagonal crystals with an aspect ratio that decreased with the length of PCL arms.; A significant decrease on equilibrium melting temperatures, degree of crystallinity and glass transition temperature was detected for samples having short PCL arms. Crystallization kinetics were also highly influenced by the length of PCL arms, being both nucleation density and secondary nucleation constant increased as the length of PCL arms decreased. Crystallization of star mixtures having different PCL lengths was determined by the larger arms since they initiated the process and subsequently shorter arms were progressively incorporated. A thermal nucleation was characteristic of multiarm star mixtures due to the different crystallization temperature ranges of samples with large and short PCL arms, whereas samples with a homogeneous arm length rendered an athermal nucleation. (C) 2015 Elsevier B.V. All rights reserved.
CitationDiaz, A. [et al.]. Study on the crystallization of multiarm stars with a poly(ethyleneimine) core and poly(epsilon-caprolactone) arms of different length. "Thermochimica acta", 10 Maig 2015, vol. 607, p. 39-52.
URIhttp://hdl.handle.net/2117/28176
DOI10.1016/j.tca.2015.03.010
ISSN0040-6031
Publisher versionhttp://www.sciencedirect.com/science/article/pii/S0040603115000921
Collections
Share: