What are domestic apples worth? Hedonic responses and sensory information as drivers of willingness to pay 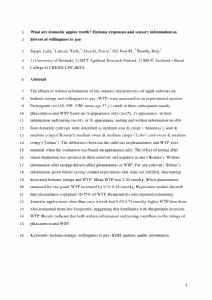 Tuorila, Hely
Document typeArticle
Rights accessOpen Access
Abstract
The effects of written information of key sensory characteristics of apple cultivars on hedonic ratings and willingness to pay (WTP) were measured in an experimental auction. Participants (n = 118, 95F, 23M, mean age 37y.) rated, in three subsequent rounds, pleasantness and WTP based on (1) appearance only (n = 25), (2) appearance, written information and tasting (n = 44), or (3) appearance, tasting and written information (n = 49). Four domestic cultivars were described as medium sour and crispy ('Amorosa'), sour and medium crispy ('Konsta'), medium sweet and medium crispy ('Lobo') and sweet and medium crispy ('Tobias'). The differences between the cultivars in pleasantness and WTP were minimal when the evaluation was based on appearance only. The effect of tasting after visual inspection was positive in three cultivars and negative in one ('Konsta'). Written information after tasting did not affect pleasantness or WTP. For one cultivar ('Tobias'), information given before tasting created expectations that were not fulfilled, thus tasting decreased hedonic ratings and WTP. Mean WTP was 2.36 euro/kg. When pleasantness increased by one point, WTP increased by 0.31-0.45 euro/kg. Regression models showed that pleasantness explained 38-55% of WTP. Respondents who reported consuming domestic apples more often than once a week had 0.52-0.74 euro/kg higher WTP than those who consumed them less frequently, suggesting that familiarity with the product increases WTP. Results indicate that both written information and tasting contribute to the ratings of pleasantness and WTP. (C) 2015 Elsevier Ltd. All rights reserved.
CitationSeppa, L. [et al.]. What are domestic apples worth? Hedonic responses and sensory information as drivers of willingness to pay. "Food quality and preference", 01 Juliol 2015, vol. 43, p. 97-105.
URIhttp://hdl.handle.net/2117/28123
DOI10.1016/j.foodqual.2015.02.013
ISSN0950-3293
Collections
Share: