Snow bands over the gulf of Finland 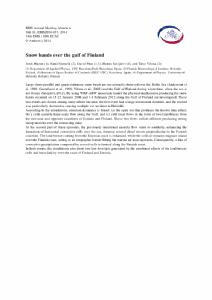 Large shore-parallel and quasi-stationary snow bands are occasionally observed over the Baltic Sea (Andersson et al, 1990; Gustafsson et al., 1998; Vihma et al., 2002) and the Gulf of Finland during wintertime, when the sea is not frozen (Savijärvi, 2012). By using WRF-ARW mesoscale model the physical mechanisms producing the snow bands occurred on 15-22 January 2006 and 1-4 February 2012 along the Gulf of Finland are investigated. These two events are chosen among many others because, the first event had a large uncommon duration, and the second was particularly destructive causing multiple car accident in Helsinki. According to the simulations, common dynamics is found: (a) the open sea that produces the known lake effect, (b) a cold, easterly large-scale flow along the Gulf, and (c) cold local flows in the form of two land-breeze from the two near and opposite coastlines of Estonia and Finland. These two flows collide offshore producing strong rising motions over the interacting zone. At the second part of these episodes, the previously mentioned easterly flow veers to southerly, enhancing the formation of horizontal convective rolls over the sea, forming several cloud streets perpendicular to the Finnish coastline. The land breeze coming from the Estonian coast is enhanced, while the cold air remains stagnant inland over the Finnish coast, acting as an orographic barrier lifting the marine air mass upwards. Consequently, a line of convective precipitation composed by several cells is formed along the Finnish coast. In both events, the simulations also show two low-level jets generated by the combined effects of the land-breeze cells and baroclinicity over the coast of Finland and Estonia.
CitationMazon, J. [et al.]. Snow bands over the gulf of Finland. A: Annual Meeting European Meteorological Society organised with European Conference on Aplications of Meteorology. "EMS annual meeting: fourteenth annual meeting of the European Meteorological Society (EMS), tenth European Conference on Applications of Meteorology (ECAM) : abstracts". Praga: 2014.
URIhttp://hdl.handle.net/2117/28099