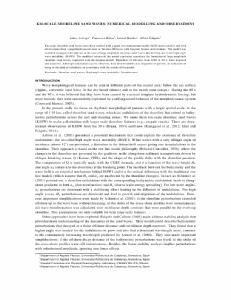 Km-scale shoreline sand waves have been studied with a quasi two dimensional model (Q2D-morfo model) and with observations from a populated coastal zone in Yucatán (México) with frequent human interventions. The model was modified to improve the physics in the case of large amplitude shoreline sand waves that develop due to the high angle wave instability (HAWI). The modified version of the model can better reproduce the formation of large-amplitude shoreline sand waves, compared with the original model. Shorelines of Yucatán, from 2004 to 2012, were digitized and analyzed. Although undulations can be observed, they do not exhibit clear migration or growth, an indication of being in the limit of instability, in accordance with the results of the model
CitationArriaga, J. [et al.]. Km-scale shoreline sand waves: Numerical modelling and observations. A: International Conference on Coastal Engineering. "Proceedings of 34th International Conference on Coastal Engineering". Seoul: 2014, p. 1-13.
URIhttp://hdl.handle.net/2117/28061
DOI10.9753/icce.v34.sediment.68
ISBN978-0-9896611-2-6
Publisher versionhttps://journals.tdl.org/icce/index.php/icce/article/view/7714