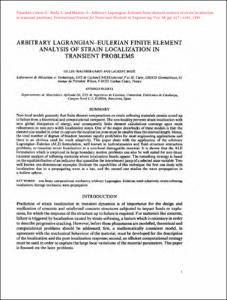 Document typeArticle
PublisherJohn Wiley & Sons
Rights accessOpen Access
Abstract
Non-local models guaranty that finite element computations on strain softening materials remain sound up to failure from a theoretical and computational viewpoint. The non-locality prevents strain localization with zero global dissipation of energy, and consequently finite element calculations converge upon mesh refinements to non-zero width localization zones. One of the major drawbacks of these models is that the element size needed in order to capture the localization zone must be smaller than the intemallength. Hence, the total number of degrees of freedom becomes rapidly prohibitive for most engineering applications and there is an obvious need for mesh adaptivity. This paper deals with the application of the arbitrary Lagrangian-Eulerian (ALE) formulation, well known in hydrodynamics and fluid-structure interaction problems, to transient strain localization in a non-local damageable material. It is shown that the ALE formulation which is employed in large boundary motion problems can also be well suited for non-linear transient analysis of softening materials where localization bands appear. The remeshing strategy is based on the equidistribution of an indicator that quantifies the interelement jump of a selected state variable. Two well known one-dimensional examples illustrate the capabilities of this technique: the first one deals with localization due to a propagating wave in a bar, and the second one studies the wave propagation in a hollow sphere.
CitationPijaudier, G.; Bode, L.; Huerta, A. Arbitrary lagrangian-eulerian finite element analysis of strain localization in transient problems. "International journal for numerical methods in engineering", Octubre 1995, vol. 38, núm. 24, p. 4171-4191.
URIhttp://hdl.handle.net/2117/28021
DOI10.1002/nme.1620382406
ISSN0029-5981
Collections
Share: