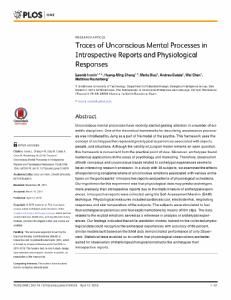 Chen, Wei
Rauterberg, Mattias
Document typeArticle
Rights accessOpen Access
Abstract
Unconscious mental processes have recently started gaining attention in a number of scientific disciplines. One of the theoretical frameworks for describing unconscious processes was introduced by Jung as a part of his model of the psyche. This framework uses the concept of archetypes that represent prototypical experiences associated with objects, people, and situations. Although the validity of Jungian model remains an open question, this framework is convenient from the practical point of view. Moreover, archetypes found numerous applications in the areas of psychology and marketing. Therefore, observation of both conscious and unconscious traces related to archetypal experiences seems to be an interesting research endeavor. In a study with 36 subjects, we examined the effects of experiencing conglomerations of unconscious emotions associated with various archetypes on the participants' introspective reports and patterns of physiological activations. Our hypothesis for this experiment was that physiological data may predict archetypes more precisely than introspective reports due to the implicit nature of archetypal experiences. Introspective reports were collected using the Self-Assessment Manikin (SAM) technique. Physiological measures included cardiovascular, electrodermal, respiratory responses and skin temperature of the subjects. The subjects were stimulated to feel four archetypal experiences and four explicit emotions by means of film clips. The data related to the explicit emotions served as a reference in analysis of archetypal experiences. Our findings indicated that while prediction models trained on the collected physiological data could recognize the archetypal experiences with accuracy of 55 percent, similar models built based on the SAM data demonstrated performance of only 33 percent. Statistical tests enabled us to confirm that physiological observations are better suited for observation of implicit psychological constructs like archetypes than introspective reports.
CitationIvonin, L. [et al.]. Traces of Unconscious Mental Processes in Introspective Reports and Physiological Responses. "PLoS one", 13 Abril 2015, vol. 10, núm. 4.
URIhttp://hdl.handle.net/2117/27987
DOI10.1371/journal.pone.0124519
ISSN1932-6203
Collections
Share: