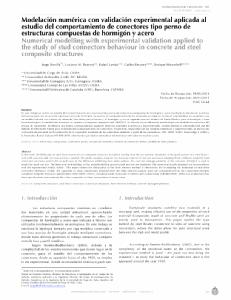 Document typeArticle
PublisherPontificia Universidad Católica de Chile
Rights accessOpen Access
Abstract
In this work, the behaviour of stud shear connectors in composite structures is studied, starting from the via numeric simulation of the push out test in a steel beam – with solid concrete slab concrete section is studied. The study considers material non-linearity material of concrete and steel, adopting firstly a bilinear model for both (steel and concrete), and in the second case, to the difference ofdiffering from other authors, the concrete damage plasticity of the concrete. ABAQUS is used to model the push out test. The basis and methodology of the modelmodelling process push out test are explained. The numerical results obtained are in accordance with the experimental results, which . This aspect shows the efficacythat of the finite element method is efficient for the in studying the behaviour of stud shear connector’s behavior. Finally, the capacities of shear connections obtained from the finite element analysis were are compared with to the connection strengths calculated using the American Specification (AISC-LRFD (2005)), European Code (Eurocode 4 (2004)) and Cuban Code (NR-080-2004). It this was is observed that, these specifications over estimate this value (capacities of shear connections) in many cases.
CitationBonilla, J. [et al.]. Numerical modelling with experimental validation applied to the study of stud connectors behaviour in concrete and steel composite structures. "Revista de ingeniería de construcción (Online)", Abril 2015, vol. 30, núm. 1, p. 53-68.
URIhttp://hdl.handle.net/2117/27986
ISSN0718-5073
Publisher versionhttp://www.ricuc.cl/index.php/ric/article/view/523
Collections
Share: