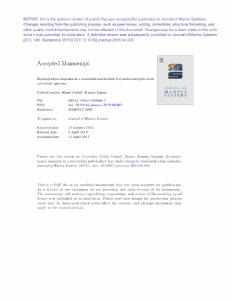 Document typeArticle
Rights accessOpen Access
Abstract
In this contribution we investigate the hydrodynamic response in a micro-tidal and shallow semi-enclosed domain. We chose a set of observations which include currents, hydrography and meteorological data obtained in Alfacs Bay (NW Mediterranean Sea). Short-term response to energetic wind events was found in the hydrography and water velocity observations, sometimes inverting the estuarine circulation or developing one-layered flow. In comparison to previous investigations in Alfacs Bay, we observed that water current variability, and also maximum velocities, were directly related to the development of surface standing waves (i.e. seiches). Mixing mechanisms versus buoyancy sources are studied through potential energy anomaly equation, proving the leading freshwater contribution to stratification, enhanced by heat fluxes in summer. On the other hand, mixing is directly related to winds, mainly in winter and early spring when both buoyancy forces are lower. We also study turbulent bottom mixing by seiches through observations, dimensionless relations and numerical modeling. Seiche induced mixing is suggested as an eventual mechanism that may break the stratification within the Bay under special circumstances.
CitationCerralbo, P.; Grifoll, M.; Espino, M. Hydrodynamic response in a microtidal and shallow bay under energetic wind and seiche episodes. "Journal of marine systems", Setembre 2015, vol. 149, p. 1-13.
URIhttp://hdl.handle.net/2117/27971
DOI10.1016/j.jmarsys.2015.04.003
ISSN0924-7963
Publisher versionhttp://www.sciencedirect.com/science/article/pii/S0924796315000603
Collections
Share: