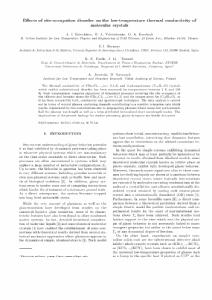 The thermal conductivity of CBrnCl4-n,(n = 0,1,2) and 2-adamantanone (C10H14O) crystals which exhibit substitutional disorder has been measured for temperatures between 2 K and 150 K. Such temperatures comprise signatures of dynamical processes involving the site occupancy of the chlorine and bromine atoms for CBrnCl4-n,(n = 0,1,2) and the oxygen atom for (C10H14O), as it has been revealed by both, calorimetry and spectroscopic techniques. The data analysis is carried out in terms of several phonon scattering channels contributing to a resistive relaxation rate which can be represented by two contributions due to propagating phonons whose mean-free path exceeds half the phonon wavelength as well as a term attributed to localized short wavelength modes. The implications of the present findings for studies pertaining to glassy dynamics are briefly discussed. (C) 2014 Elsevier B.V. All rights reserved.
CitationKrivchikov, A. [et al.]. Effects of site-occupation disorder on the low-temperature thermal conductivity of molecular crystals. "Journal of non-crystalline solids", 01 Gener 2015, vol. 407, p. 141-148.
URIhttp://hdl.handle.net/2117/27942
DOI10.1016/j.jnoncrysol.2014.08.006
ISSN0022-3093