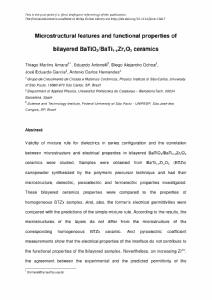 Hernandes, Antonio Carlos
Tipus de documentArticle
Condicions d'accésAccés obert
Abstract
Validity of mixture rule for dielectrics in series configuration and the correlation between microstructure and electrical properties in bilayered BaTiO3/BaTi1-xZrxO3 ceramics were studied. Samples were obtained from BaTi1-xZrxO3 (BTZx) nanopowder synthesized by the polymeric precursor technique and had their microstructure, dielectric, piezoelectric, and ferroelectric properties investigated. These bilayered ceramics' properties were compared to the properties of homogeneous BTZx samples. And, also, the formers' electrical permittivities were compared with the predictions of the simple mixture rule. According to the results, the microstructures of the layers do not differ from the microstructure of the corresponding homogeneous BTZx ceramic. And pyroelectric coefficient measurements show that the electrical properties of the interface do not contribute to the functional properties of the bilayered samples. Nevertheless, on increasing Zr4+, the agreement between the experimental and the predicted permittivity of the bilayered ceramics is gradually reduced, mainly at temperatures where the permittivity is governed by the response of the layer containing Zr4+. As a mechanical joint between the layers, the interface induces stresses during sintering due to thermal mismatch between compositions, thereby affecting the bilayers' electrical properties. Our results show that interface's mechanical effects compromise the functional properties of layered ferroelectric ceramics.
CitacióAmaral, T. M. [et al.]. Microstructural features and functional properties of bilayered BaTiO3/BaTi1-xZrxO3 ceramics. "Journal of the American Ceramic Society", 01 Abril 2015, vol. 98, núm. 4, p. 1169-1174.
URIhttp://hdl.handle.net/2117/27939
DOI10.1111/jace.13417
ISSN0002-7820
Versió de l'editorhttp://onlinelibrary.wiley.com/doi/10.1111/jace.13417/epdf
Col·leccions
Comparteix: