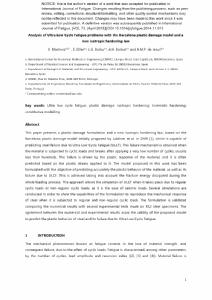 de Jesus, A.M.P.
Document typeArticle
Rights accessOpen Access
ProjectCOMP-DES-MAT - Advanced tools for computational design of engineering materials (EC-FP7-320815)
Abstract
This paper presents a plastic-damage formulation and a new isotropic hardening law, based on the Barcelona plastic damage model initially proposed by Lubliner et al. (1989) [1], which is capable of predicting steel failure due to Ultra Low Cycle Fatigue (ULCF). This failure mechanism is obtained when the material is subjected to cyclic loads and breaks after applying a very low number of cycles, usually less than hundreds. The failure is driven by the plastic response of the material, and it is often predicted based on the plastic strains applied to it. The model proposed in this work has been formulated with the objective of predicting accurately the plastic behavior of the material, as well as its failure due to ULCF. This is achieved taking into account the fracture energy dissipated during the whole loading process. This approach allows the simulation of ULCF when it takes place due to regular cyclic loads or non-regular cyclic loads, as it is the case of seismic loads. Several simulations are conducted in order to show the capabilities of the formulation to reproduce the mechanical response of steel when it is subjected to regular and non-regular cyclic loads. The formulation is validated comparing the numerical results with several experimental tests made on X52 steel specimens. The agreement between the numerical and experimental results asses the validity of the proposed model to predict the plastic behavior of steel and its failure due to Ultra Low Cycle Fatigue. (C) 2014 Elsevier Ltd. All rights reserved.
CitationMartinez, X. [et al.]. Analysis of Ultra Low Cycle Fatigue problems with the Barcelona plastic damage model and a new isotropic hardening law. "International journal of fatigue", Abril 2015, vol. 73, p. 132-142.
URIhttp://hdl.handle.net/2117/27861
DOI10.1016/j.ijfatigue.2014.11.013
ISSN0142-1123
Publisher versionhttp://www.sciencedirect.com/science/article/pii/S0142112314003016
Collections
Share: