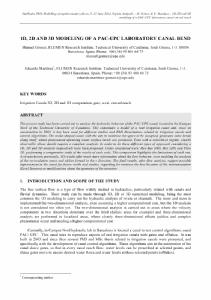 The present study has been carried out to analyze the hydraulic behavior of the PAC-UPC canal, located in the Campus Nord of the Technical University of Catalonia. This constitutes a model of a real irrigation canal and, since its construction in 2003, it has been used for different studies and PhD dissertations related to irrigation canals and control algorithms. The snake-shaped canal, with the aim to minimize the space to be occupied, generates some bends along itself, where pronounced upraising water surface levels are produced. Even with a subcritical regime, clearly observable whose details require a complete analysis. In order to do these different types of approach considering a 1D, 2D and 3D analysis respectively have been proposed. Codes considered were: Hec-Ras (1D), Iber (2D) and Flow 3D, performing a comparative study of the results of each code. This comparison highlights the limitations of each one. As it was known previously, 3D results offer much more information about the flow behavior, even enabling the analysis of the recirculation zones and eddies formed in the z direction. The final results, after flow analysis, suggest possible improvement in the canal for future works and studies, regarding for instance the best location of the instrumentation (Level Sensors) or modifications about the geometry of the structure.
CitationGomez, M.; Martinez, E. 1D, 2D and 3D modeling PF A PAC-UPC laboratory canal bend. A: SimHydro International Conference. "SIMHYDRO 2014". Sophia Antipolis: 2014.
URIhttp://hdl.handle.net/2117/27856
ISBN979-10-93567-01-3