Task-based programming with OmpSs and its application 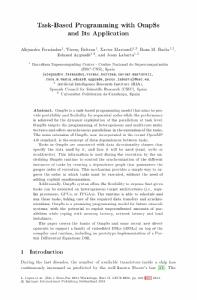 Task-Based Programming with OmpSs and Its Application (1,039Mb)
Share:

Document typeConference report
PublisherSpringer
Rights accessOpen Access
Abstract
OmpSs is a task-based programming model that aims to provide portability and flexibility for sequential codes while the performance is achieved by the dynamic exploitation of the parallelism at task level. OmpSs targets the programming of heterogeneous and multi-core architectures and offers asynchronous parallelism in the execution of the tasks. The main extension of OmpSs, now incorporated in the recent OpenMP 4.0 standard, is the concept of data dependences between tasks. Tasks in OmpSs are annotated with data directionality clauses that specify the data used by it, and how it will be used (read, write or read&write). This information is used during the execution by the underlying OmpSs runtime to control the synchronization of the different instances of tasks by creating a dependence graph that guarantees the proper order of execution. This mechanism provides a simple way to express the order in which tasks must be executed, without the need of adding explicit synchronization. Additionally, OmpSs syntax offers the flexibility to express that given tasks can be executed on heterogeneous target architectures (i.e., regular processors, GPUs, or FPGAs). The runtime is able to schedule and run these tasks, taking care of the required data transfers and synchronizations. OmpSs is a promising programming model for future exascale systems, with the potential to exploit unprecedented amounts of parallelism while coping with memory latency, network latency and load imbalance. The paper covers the basics of OmpSs and some recent new developments to support a family of embedded DSLs (eDSLs) on top of the compiler and runtime, including an prototype implementation of a Partial Differential Equations DSL.
CitationFernandez, A. [et al.]. Task-based programming with OmpSs and its application. A: European Conference of Parallel and Distributed Computing. "Euro-Par 2014: Parallel Processing Workshops: Euro-Par 2014 International Workshops: Porto, Portugal: August 25-26, 2014: revised selected papers: part II". Porto: Springer, 2014, p. 602-613.
URIhttp://hdl.handle.net/2117/27851
DOI10.1007/978-3-319-14313-2_51
ISBN978-3-319-14312-5
Publisher versionhttp://link.springer.com/chapter/10.1007%2F978-3-319-14313-2_51
Collections
Share: