Spanish activities in the framework of the CHARMEX project since 2009: a summary 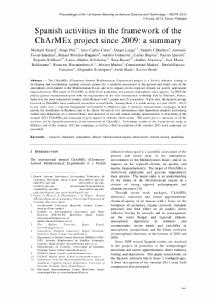 Spanish activities in the framework of the ChArMEx project since 2009: a summary (1,656Mb)
Share:

García Vízcaino, David
Bach, Jordi
Bush, Xavier
Document typeConference report
PublisherUniversidade de Évora
Rights accessOpen Access
Abstract
The ChArMEx (Chemistry-Aerosol Mediterranean Experiment) project is a French initiative aiming at developing and coordinating regional research actions for a scientific assessment of the present and future state of the atmospheric environment in the Mediterranean Basin, and of its impacts on the regional climate, air quality, and marine biogeochemistry. The target of ChArMEx is short-lived particulate and gaseous tropospheric trace species. In 2009 the project gained internationalization with the organization of the first international workshop held in Toulouse, France. Spain was the most represented country (after France) with 7 groups and 10 researchers. Up to date, the Spanish groups involved in ChArMEx have conducted research in several fields. Among them it is worth noting: a 3-year (2010 – 2012) in-situ study over a regional background environment in Mallorca plus 3 intensive measurement campaigns in that period; the installation in Mallorca and in the Sierra Nevada of two autonomous total deposition samplers performing weekly dust deposition on a network basis; and intensive in-situ and remote sensing measurements in Barcelona in thesummer 2012 ChArMEx pre-campaign to give support to airborne observations. The paper gives a summary of all the activities led by Spanish researchers in the framework of ChArMEx. Preliminary results of the 3-year in-situ study in Mallorca and of the summer 2012 pre-campaign, as well as a brief description of the summer 2013 main campaign are presented.
CitationSicard, M. [et al.]. Spanish activities in the framework of the CHARMEX project since 2009: a summary. A: Iberian Meeting on Aerosol Science and Technology. "RICTA 2013: 1st Iberian Meeting on Aerosol Science and Technology: Évora, Portugal: July 1-3, 2013: proceedings book". Évora: Universidade de Évora, 2013, p. 125-129.
URIhttp://hdl.handle.net/2117/27846
ISBN978-989-20-3962-6
Publisher versionhttp://www.ricta2013.cge.uevora.pt/wp-content/uploads/2013/10/E-ProcBook-RICTA2013.pdf
Collections
Share: