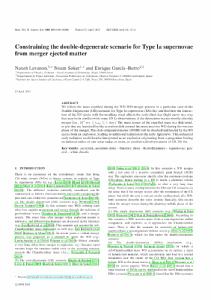 Document typeArticle
Rights accessOpen Access
Abstract
We follow the mass expelled during the WD-WD merger process in a particular case of the double-degenerate (DD) scenario for Type Ia supernovae (SNe Ia), and find that the interaction of the SN ejecta with the resulting wind affects the early (first day) light-curve in a way that may be in conflict with some SN Ia observations, if the detonation occurs shortly after the merger, i.e. (10(3) s less than or similar to t(exp) less than or similar to 1 d). The main source of the expelled mass is a disc-wind, or jets that are launched by the accretion disc around the more massive white dwarf (WD) during the viscous phase of the merger. This disc-originated matter will be shocked and heated by the SN ejecta from an explosion, leading to additional radiation in the early light-curve. This enhanced early radiation could then be interpreted as an explosion originating from a progenitor having an inferred radius of one solar radius or more, in conflict with observations of SN 2011fe.
CitationLevanon, N.; Soker, N.; Garcia-berro, E. Constraining the double-degenerate scenario for Type Ia supernovae from merger ejected matter. "Monthly notices of the Royal Astronomical Society", 01 Març 2015, vol. 447, núm. 3, p. 2803-2809.
URIhttp://hdl.handle.net/2117/27814
DOI10.1093/mnras/stu2580
ISSN0035-8711
Collections
Share: