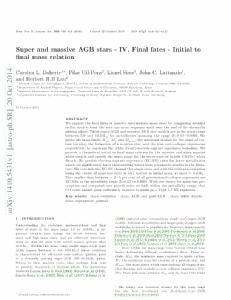 Siess, Lionel
Lattanzio, John C.
Lau, Herbert B.
Document typeArticle
Rights accessOpen Access
Abstract
We explore the final fates of massive intermediate-mass stars by computing detailed stellar models from the zero-age main sequence until near the end of the thermally pulsing phase. These super-asymptotic giant branch (super-AGB) and massive AGB star models are in the mass range between 5.0 and 10.0 M circle dot for metallicities spanning the range Z = 0.02-0.0001. We probe the mass limits M-up, M-n and M-mass, the minimum masses for the onset of carbon burning, the formation of a neutron star and the iron core-collapse supernovae, respectively, to constrain the white dwarf/electron-capture supernova (EC-SN) boundary. We provide a theoretical initial-to-final mass relation for the massive and ultra-massive white dwarfs and specify the mass range for the occurrence of hybrid CO(Ne) white dwarfs. We predict EC-SN rates for lower metallicities which are significantly lower than existing values from parametric studies in the literature. We conclude that the EC-SN channel (for single stars and with the critical assumption being the choice of mass-loss rate) is very narrow in initial mass, at most approximate to 0.2 M circle dot. This implies that between 2 and 5 per cent of all gravitational collapse supernova are EC-SNe in the metallicity range Z = 0.02-0.0001. With our choice for mass-loss prescription and computed core growth rates, we find, within our metallicity range, that CO cores cannot grow sufficiently massive to undergo a Type 1.5 SN explosion.
CitationDoherty, C. [et al.]. Super- and massive AGB stars - IV. Final fates initial-to-final mass relation. "Monthly notices of the Royal Astronomical Society", 21 Gener 2015, vol. 446, núm. 3, p. 2599-2612.
URIhttp://hdl.handle.net/2117/27811
DOI10.1093/mnras/stu2180
ISSN0035-8711
Collections
Share: