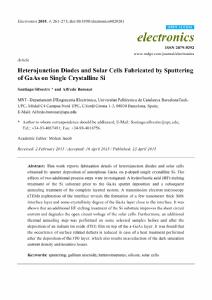 This work reports fabrication details of heterojunction diodes and solar cells obtained by sputter deposition of amorphous GaAs on p-doped single crystalline Si. The effects of two additional process steps were investigated: A hydrofluoric acid (HF) etching treatment of the Si substrate prior to the GaAs sputter deposition and a subsequent annealing treatment of the complete layered system. A transmission electron microscopy (TEM) exploration of the interface reveals the formation of a few nanometer thick SiO2 interface layer and some crystallinity degree of the GaAs layer close to the interface. It was shown that an additional HF etching treatment of the Si substrate improves the short circuit current and degrades the open circuit voltage of the solar cells. Furthermore, an additional thermal annealing step was performed on some selected samples before and after the deposition of an indium tin oxide (ITO) film on top of the a-GaAs layer. It was found that the occurrence of surface related defects is reduced in case of a heat treatment performed after the deposition of the ITO layer, which also results in a reduction of the dark saturation current density and resistive losses.
CitationSilvestre, S.; Boronat, A. Heterojunction diodes and solar cells fabricated by sputtering of GaAs on single crystalline Si. "Electronics", 23 Abril 2015, núm. 4, p. 261-273.
URIhttp://hdl.handle.net/2117/27809
DOI10.3390/electronics4020261
ISSN2079-9292
Publisher versionhttp://www.mdpi.com/2079-9292/4/2/261/htm