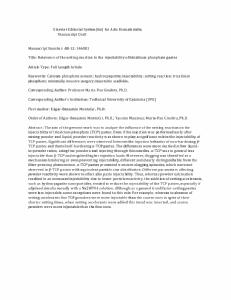 Montufar Jiménez, Edgar Benjamin
Maazouz, Yassine
Tipo de documentoArtículo
Condiciones de accesoAcceso abierto
Resumen
The ai m of the present work was to analyze the influence of the setting reaction on the injectability of tricalcium phosphate (TCP) pastes. Even if the injection was performed early after mixing powder and liquid, powder reactivity was shown to play a significan t role in the injectability of TCP pastes. Significant differences were observed between the injection behavior of non - hardening β - TCP pastes and that of self - hardening α - TCP pastes. The differences were more marked at low liquid - to - powder ratios, using fi ne powders and injecting through thin needles. α - TCP was in general less injectable than β - TCP and required higher injection loads. Moreover, clogging was identified as a mechanism hindering or even preventing injectability, different and clearly distingui shable from the filter - pressing phenomenon. α - TCP pastes presented transient clogging episodes, which were not observed in β - TCP pastes with equivalent particle size distribution. Different parameters affecting powder reactivity were shown to affect also p aste injectability. Thus, whereas powder calcination resulted in an increased injectability due to lower particle reactivity, the addition of setting accelerants, such as hydroxyapatite nanoparticles, tended to reduce the injectability of the TCP pastes, e specially if adjoined simultaneously with a Na2HPO4 solution. Although as a general trend faster setting pastes were less injectable, some exceptions were found to this rule. For example, whereas in absence of setting accelerants fine TCP powders were more injectable than the coarse ones in spite of their shorter setting times, when setting accelerants were added this trend was inverted, and coarse powders were more injectable than the fine ones
CitaciónGinebra, M.P.; Montufar, E.; Maazouz, Y. Relevance of the setting reaction to the injectability of tricalcium phosphate pastes. "Acta biomaterialia", 09 Abril 2013, vol. 9, núm. 4, p. 6188-6198.
URIhttp://hdl.handle.net/2117/27805
DOI10.1016/j.actbio.2012.11.028
ISSN1742-7061
Versión del editorhttp://www.sciencedirect.com/science/article/pii/S1742706112005788
Colecciones
Comparte: