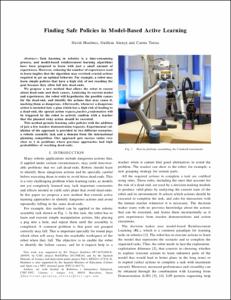 Document typeConference report
Rights accessOpen Access
European Commission's projectINTELLACT - Intelligent observation and execution of Actions and manipulations (EC-FP7-269959)
Abstract
Task learning in robotics is a time-consuming process, and model-based reinforcement learning algorithms have been proposed to learn with just a small amount of experiences. However, reducing the number of experiences used to learn implies that the algorithm may overlook crucial actions required to get an optimal behavior. For example, a robot may learn simple policies that have a high risk of not reaching the goal because they often fall into dead-ends. We propose a new method that allows the robot to reason about dead-ends and their causes. Analyzing its current model and experiences, the robot will hypothesize the possible causes for the dead-end, and identify the actions that may cause it, marking them as dangerous. Afterwards, whenever a dangerous action is included into a plan which has a high risk of leading to a dead-end, the special action request teacher confirmation will be triggered by the robot to actively confirm with a teacher that the planned risky action should be executed. This method permits learning safer policies with the addition of just a few teacher demonstration requests. Experimental validation of the approach is provided in two different scenarios: a robotic assembly task and a domain from the international planning competition. Our approach gets success ratios very close to 1 in problems where previous approaches had high probabilities of reaching dead-ends
CitationMartínez, D.; Alenyà, G.; Torras, C. Finding safe policies in model-based active learning. A: IROS Machine Learning in Planning and Control of Robot Motion Workshop. "Proceedings of the 2014 IROS Machine Learning in Planning and Control of Robot Motion Worksho". Chicago: 2014, p. 1-6.
URIhttp://hdl.handle.net/2117/27799
Publisher versionhttp://www.cs.unm.edu/amprg/mlpc14Workshop/proceedings.html
Collections
Share: