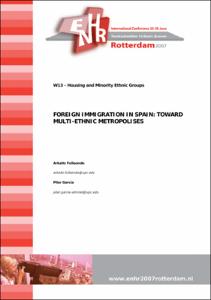 Foreign immigration is a very recent phenomenon in Spain. Over the last few years, and especially since 2001, there has been strong growth in the number of non-EU immigrants changing the historical characterisation of Spain as a country of emigration, above all in the 1960s and 1970s. As in other countries with a high degree of foreign population, one of the principal consequences has been the transformation of the social structure, with a special focus on the larger cities. In this way, the main metropolises (Madrid, Barcelona, Valencia, Sevilla, Malaga, Bilbao and Zaragoza) have been the principal areas for the settlement of those migration waves. Between 1999 and 2005, these metropolises have absorbed some 45% of the 3,000,000 immigrants who have arrived in Spain. This phenomenon has led to these metropolises becoming more diverse over a short time, generating different kinds of problems relating to housing and the residential segregation of such immigrants. This paper seeks to analyse the immigrants’ settlement in the main metropolitan areas of Spain and identify the main territorial effects. In order to do this, the paper will focus on the immigrants’ settlement in the metropolitan system and the function of central city and the metropolitan cities upon the spatial residential distribution of the immigrants. In order to isolate the recent evolution, the analysis will be restricted to the period 2001-2005.
CitationGarcia Almirall, Pilar; Fullaondo, Arkaitz. Foreing immigration in Spain: Toward multi-ethnic metropolises. A:ENHR: Sustainable urban areas. Rotterdam: el congrés, 2007. 1 vol.Pàg. 1-22.
URIhttp://hdl.handle.net/2117/2779