Evolution of the turbulence during the afternoon transition of the convective boundary layer: a spectral analysis 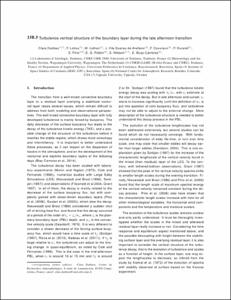 Durand, Pierre
Blay Carreras, Estel
Vilà Guerau de Arellano, Jordi
Document typeConference report
PublisherAmerican Meteorological Society
Rights accessOpen Access
Abstract
The transition from a well-mixed convective boundary layer to a residual layer overlying a stabilized nocturnal layer raises several issues, which remain difficult to address from both modeling and observational perspectives. The well mixed convective boundary layer is mainly forced by buoyancy, with fully developed turbulence. The daily decrease of the surface buoyancy flux leads to the decay of the turbulence kinetic energy, and a possible change of the structure of the turbulence before it reaches the stable regime, with more anisotropy and intermittency. It is important to better understand these processes, as it can impact on the dispersion of tracers in the atmosphere, and on the development of the nocturnal and daytime boundary layers of the following days. The turbulence decay has been studied with laboratory experiments (Monin and Yaglom, 1975, Cole and Fernando 1998), numerical studies (Nieuwstadt and Brost 1986, Sorbjan 1997) and observations (Fitzarrald et al 2004, Grant 1997). The decay is related to the decrease of the surface buoyancy flux, but with complexity gained with shear-driven boundary layers (Pino et al 2006, Goulart et al 2003), which slow the decay. The evolution of the structure of turbulence during its decay remains unclear, with results on the evolution of characteristic scales that vary with the considered approaches and conditions. An observational and numerical study is proposed to address this related issue, based on the BLLAST (Boundary Layer Late Afternoon and Sunset Turbulence) dataset. BLLAST aims at better understanding the turbulent processes of the late afternoon transition, and leans on a field experiment that took place in summer 2011 in South-West France. A well-documented cloud-free weak wind day is considered here to analyze in details the evolution of the turbulence along the day, from midday to sunset. In particular, the decay is studied as a function of height, and the evolution of the turbulence kinetic energy is described with a thorough analysis of the turbulence spectra. The case study combines observations of the mean structure by radiosondes and remote sensing, and observations of the turbulence with surface stations, tethered balloon and aircraft. It is the base of a complementary idealized numerical study with a large eddy simulation. From both observations and numerical simulations, the turbulence is described with the characteristics of the spectral energy density, especially the typical turbulence lengthscales and the sharpness of the transition from energy-containing eddies to the inertial subrange. An analytical model proposed by Kristensen and Lenschow (1988) for homogeneous non-isotropic turbulence is used to approximate the observed and LES-modeled spectra and estimate their characteristics. Our analysis enables us to (1) test the capability of the large eddy simulation to represent the turbulence structure of the afternoon decay, (2) evaluate the evolution of integral scales, turbulent kinetic energy, shape of the spectra in both observations and numerical simulation, and as a function of height, (3) further understand the potential decoupling with height that occurs when the surface fluxes get too weak to maintain fully developed turbulence within the entire depth of the convective boundary layer, (4) put into evidence the limitations of the spectral approach for this critical period of the planetary boundary layer diurnal cycle.
CitationDarbieu, C. [et al.]. Evolution of the turbulence during the afternoon transition of the convective boundary layer: a spectral analysis. A: Symposium on Boundary Layers and Turbulence. "Symposium on Boundary layer and Turbulence". Leeds: American Meteorological Society, 2014.
URIhttp://hdl.handle.net/2117/27591
Collections
Share: