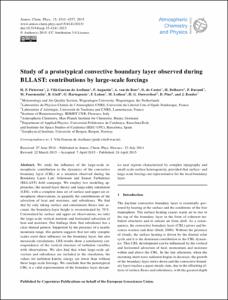 Reuder, Joachim
Document typeArticle
Rights accessOpen Access
Abstract
We study the influence of the large-scale at- mospheric contribution to the dynamics of the convective boundary layer (CBL) in a situation observed during the Boundary Layer Late Afternoon and Sunset Turbulence (BLLAST) field campaign. We employ two modeling ap- proaches, the mixed-layer theory and large-eddy simulation (LES), with a complete data set of surface and upper-air at- mospheric observations, to quantify the contributions of the advection of heat and moisture, and subsidence. We find that by only taking surface and entrainment fluxes into ac- count, the boundary-layer height is overestimated by 70 %. Constrained by surface and upper-air observations, we infer the large-scale vertical motions and horizontal advection of heat and moisture. Our findings show that subsidence has a clear diurnal pattern. Supported by the presence of a nearby mountain range, this pattern suggests that not only synoptic scales exert their influence on the boundary layer, but also mesoscale circulations. LES results show a satisfactory cor- respondence of the vertical structure of turbulent variables with observations. We also find that when large-scale ad- vection and subsidence are included in the simulation, the values for turbulent kinetic energy are lower than without these large-scale forcings. We conclude that the prototypical CBL is a valid representation of the boundary-layer dynam- ics near regions characterized by complex topography and small-scale surface heterogeneity, provided that surface- and large-scale forcings are representative for the local boundary layer.
CitationPietersen, H. [et al.]. Study of a prototypical convective boundary layer observed during BLLAST: contributions by large-scale forcings. "Atmospheric chemistry and physics", 24 Abril 2015, vol. 15, p. 4241-4257.
URIhttp://hdl.handle.net/2117/27590
DOI10.5194/acp-15-4241-2015
ISSN1680-7316
Publisher versionhttp://www.atmos-chem-phys.net/15/4241/2015/acp-15-4241-2015.html
Collections
Share: