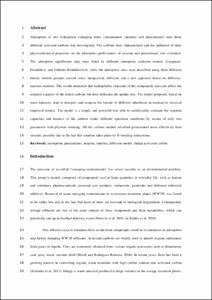 Adsorption of two widespread emerging water contaminants (atrazine and paracetamol) onto three different activated carbons was investigated. The carbons were characterized and the influence of their physicochemical properties on the adsorption performance of atrazine and paracetamol was evaluated. The adsorption equilibrium data were fitted to different adsorption isotherm models (Langmuir, Freundlich, and Dubinin-Radushkevich) while the adsorption rates were described using three different kinetic models (pseudo second order, intraparticle diffusion and a new approach based on diffusion-reaction models). The results indicated that hydrophobic character of the compounds does not affect the sorption capacity of the tested carbons but does influence the uptake rate. The model proposed, based on mass balances, lead to interpret and compare the kinetic of different adsorbents in contrast to classical empirical models. The model is a simple and powerful tool able to satisfactorily estimate the sorption capacities and kinetics of the carbons under different operation conditions by means of only two parameters with physical meaning. All the carbons studied adsorbed paracetamol more effectively than atrazine, possibly due to the fact that sorption takes place by H-bonding interactions.
CitationLlado, J. [et al.]. Role of activated carbon properties in atrazine and paracetamol adsorption equilibrium and kinetics. "Process safety and environmental protection", 20 Maig 2015, vol. 95, núm. May, p. 51-59.
URIhttp://hdl.handle.net/2117/27552
DOI10.1016/j.psep.2015.02.013
ISSN0957-5820
Publisher versionhttp://www.sciencedirect.com/science/article/pii/S0957582015000269