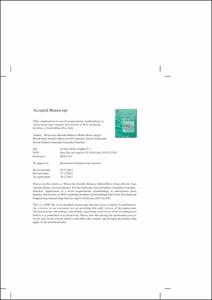 Gabriel Buguña, David
Document typeArticle
Rights accessOpen Access
Abstract
Monitoring the biological activity in biotrickling filters is difficult since it implies estimating biomass concentration and its growth yield, which can hardly be measured in immobilized biomass systems. In this study, the characterization of a sulfide-oxidizing nitrate-reducing biomass obtained from an anoxic biotrickling filter was performed through the application of respirometric and titrimetric techniques. Previously, the biomass was maintained in a continuous stirred tank reactor under steady-state conditions resulting in a growth yield of 0.328 +/- 0.045 g VSS/g S. To properly assess biological activity in respirometric tests, abiotic assays were conducted to characterize the stripping of CO2 and sulfide. The global mass transfer coefficient for both processes was estimated. Subsequently, different respirometric tests were performed: (1) to solve the stoichiometry related to the autotrophic denitrification of sulfide using either nitrate or nitrite as electron acceptors, (2) to evaluate the inhibition caused by nitrite and sulfide on sulfide oxidation, and (3) to propose, calibrate, and validate a kinetic model considering both electron acceptors in the overall anoxic biodesulfurization process. The kinetic model considered a Haldane-type equation to describe sulfide and nitrite inhibitions, a non-competitive inhibition to reflect the effect of sulfide on the elemental sulfur oxidation besides single-step denitrification since no nitrite was produced during the biological assays.
CitationMora, M. [et al.]. Kinetic and stoichiometric characterization of anoxic sulfide oxidation by SO-NR mixed cultures from anoxic biotrickling filters. "Applied microbiology and biotechnology", 01 Gener 2015, vol. 99, núm. 1, p. 77-87.
URIhttp://hdl.handle.net/2117/27551
DOI10.1007/s00253-014-5688-5
ISSN0175-7598
Publisher versionhttp://link.springer.com/article/10.1007%2Fs00253-014-5688-5
Collections
Share: