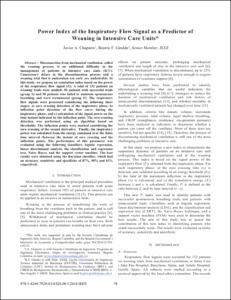 Document typeConference lecture
Rights accessOpen Access
Abstract
Disconnection from mechanical ventilation, called the weaning process, is an additional difficulty in the management of patients in intensive care units (ICU). Unnecessary delays in the discontinuation process and a weaning trial that is undertaken too early are undesirable. In this study, we propose an extubation index based on the power of the respiratory flow signal (Pi). A total of 132 patients on weaning trials were studied: 94 patients with successful trials (group S) and 38 patients who failed to maintain spontaneous breathing and were reconnected (group F). The respiratory flow signals were processed considering the following three stages: a) zero crossing detection of the inspiratory phase, b) inflection point detection of the flow curve during the inspiratory phase, and c) calculation of the signal power on the time instant indicated by the inflection point. The zero crossing detection was performed using an algorithm based on thresholds. The inflection points were marked considering the zero crossing of the second derivative. Finally, the inspiratory power was calculated from the energy contained over the finite time interval (between the instant of zero crossing and the inflection point). The performance of this parameter was evaluated using the following classifiers: logistic regression, linear discriminant analysis, the classification and regression tree, Naive Bayes, and the support vector machine. The best results were obtained using the Bayesian classifier, which had an accuracy, sensitivity and specificity of 87%, 90% and 81% respectively.
CitationChaparro, J.; Giraldo, B. Power index of the inspiratory flow signal as a predictor of weaning in intensive care units. A: IEEE Engineering in Medicine and Biology Society. "36th Annual International Conference of the IEEE Engineering in Medicine and Biology Society (IEEE EMBC)". Chicago, IL: 2014, p. 78-81.
URIhttp://hdl.handle.net/2117/27549
ISBN978-1-4244-7929-0
Collections
Share: