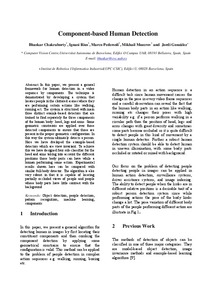 Show full item record
Chakraborty, Bhaskar
Rius, Ignasi
Perdersoli, Marco
Mozerov, Mikhail
Gonzàlez, Jordi
Document typeConference report
Publishers. n.
Rights accessOpen Access
Abstract
In this paper, we present a general framework for human detection in a video sequence by components. The technique is demonstrated by developing a system that locates people in the cluttered scenes where they are performing certain actions like walking, running etc. The system is structured with main three distinct example-based detectors that are trained to find separately the three components of the human body: head, legs and arms. Some geometric constraints are applied over those detected components to ensure that those are present in the proper geometric configuration. In this way the system ultimately detects a person. Here we have developed the example-based detectors which are view invariant. To achieve this we have designed four sub-classifier for the head and arms taking into account the different positions those body parts can have while a human performing some action. Experimental results shown here can be compared with similar full-body detector. The algorithm is also very robust in that it is capable of locating partially occluded views of people and people whose body parts have little contrast with the background.
CitationChakraborty, Bhaskar; Rius, Ignasi; Perdersoli, Marco; Mozerov, Mikhail; Gonzàlez, Jordi. "Component-based human detection". A: 2nd Computer Vision: Advances in Research & Development (CVCRD), Bellaterra, Espanya, 2007. s. n., 2007, p. 1-6.
URIhttp://hdl.handle.net/2117/2748
Collections
Share: