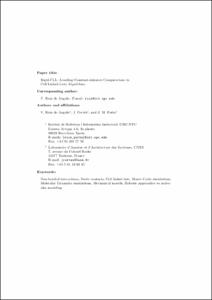 Many of the existing molecular simulation tools require the efficient identification of the set of nonbonded interacting atoms. This is necessary, for instance, to compute the energy values or the steric contacts between atoms. Cell linked-lists can be used to determine the pairs of atoms closer than a given cutoff distance in asymptotically optimal time. Despite this long-term optimality, many spurious distances are anyway computed with this method. Therefore, several improvements have been proposed, most of them aiming to refine the volume of influence for each atom. Here, we suggest a different improvement strategy based on avoiding to fill cells with those atoms that are always at a constant distance of a given atom. This technique is particularly effective when large groups of the particles in the simulation behave as rigid bodies as it is the case in simplified models considering only few of the degrees of freedom of the molecule. In these cases, the proposed technique can reduce the number of distance computations by more than one order of magnitude, as compared with the standard cell linked-list technique. The benefits of this technique are obtained without incurring in additional computation costs, because it carries out the same operations as the standard cell linked-list algorithm, although in a different order. Since the focus of the technique is the order of the operations, it might be combined with existing improvements based on bounding the volume of influence for each atom
CitationRuiz De Angulo, V.; Cortés, J.; Porta, J.M. "Journal of computational chemistry". 30 Gener 2012.
URIhttp://hdl.handle.net/2117/27429
DOI10.1002/jcc.21974
ISSN0192-8651
Publisher versionhttp://dx.doi.org/10.1002/jcc.21974