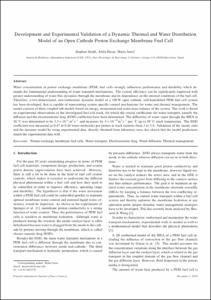 Except where otherwise noted, content on this work is licensed under a Creative Commons license : Attribution-NonCommercial-NoDerivs 3.0 Spain
Abstract
Water concentration in proton exchange membrane (PEM) fuel cells strongly influences performance and durability which demands for fundamental understanding of water transport mechanisms. The system efficiency can be significantly improved with greater understanding of water flux dynamics through the membrane and its dependence on the internal conditions of the fuel cell. Therefore, a two-dimensional, non-isothermal, dynamic model of a 100 W open cathode, self-humidified PEM fuel cell system has been developed, that is capable of representing system specific control mechanisms for water and thermal management. The model consists of three coupled submodels based on energy, momentum and water mass balance of the system. The work is based on experimental observations of the investigated fuel cell stack, for which the crucial coefficients for water transport, namely the diffusion and the electroosmotic drag (EOD) coefficient have been determined. The diffusivity of water vapor through the MEA at 30 °C was determined to be 3.3 × 10-8 m2 s-1 and increases by 3 × 10-10 m2 s-1 °C-1 up to 50 °C stack temperature. The EOD coefficient was measured as 0.47–0.48 water molecules per proton at stack currents from 1 to 3 A. Validation of the steady state and the dynamic model by using experimental data, directly obtained from laboratory tests, has shown that the model predictions match the experimental data well.
CitationStrahl, S.; Husar, A.; Serra, M. Development and experimental validation of a dynamic thermal and water distribution model of an open cathode proton exchange membrane fuel cell. "Journal of power sources", 2011, vol. 196, núm. 9, p. 4251-4263.
URIhttp://hdl.handle.net/2117/27392
DOI10.1016/j.jpowsour.2010.10.074
ISSN0378-7753
Publisher versionhttp://dx.doi.org/10.1016/j.jpowsour.2010.10.074
Collections
Share: