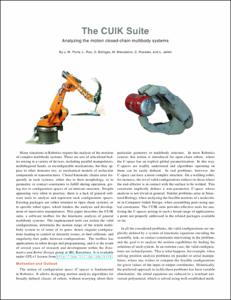 Bohigas Nadal, Oriol
Manubens Ferriol, Montserrat
Rosales Gallegos, Carlos
Jaillet, Leonard Georges
Document typeArticle
Rights accessOpen Access
Abstract
Many situations in robotics require the analysis of the motions of complex multibody systems. These are sets of articulated bodies arising in a variety of devices, including parallel manipulators, multifingered hands, or reconfigurable mechanisms, but they appear in other domains too as mechanical models of molecular compounds or nanostructures. Closed kinematic chains arise frequently in such systems, either due to their morphology or due to geometric or contact constraints to fulfill during operation, giving rise to configuration spaces of an intricate structure. Despite appearing very often in practice, there is a lack of general software tools to analyze and represent such configuration spaces. Existing packages are oriented either to open-chain systems or to specific robot types, which hinders the analysis and development of innovative manipulators. This article describes the CUIK suite, a software toolbox for the kinematic analysis of general multibody systems. The implemented tools can isolate the valid configurations, determine the motion range of the whole multibody system or of some of its parts, detect singular configurations leading to control or dexterity issues, or find collision- and singularity-free paths between configurations. The toolbox has applications in robot design and programming and is the result of several years of research and development within the Kinematics and Robot Design group at IRI, Barcelona. It is available under GPLv3 license from http://www.iri.upc.edu/cuik.
CitationPorta, J.M. [et al.]. The CUIK suite: analyzing the motion closed-chain multibody systems. "IEEE robotics and automation magazine", 2014, vol. 21, núm. 3, p. 105-114.
URIhttp://hdl.handle.net/2117/27365
DOI10.1109/MRA.2013.2287462
ISSN1070-9932
Collections
Share: