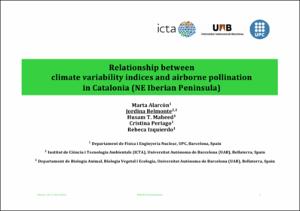 Except where otherwise noted, content on this work is licensed under a Creative Commons license : Attribution-NonCommercial-NoDerivs 3.0 Spain
Abstract
Here we explore the effect of climatic variability on the airborne pollen series recorded in Catalonia (NE Iberian Peninsula) considered of high interest due to abundance, landscape importance and/or allergenic significance. In this sense, the relationship between the annual and winter (December to March) phases of the North Atlantic Oscillation (NAO), the Western Mediterranean Oscillation (WeMO) and the Arctic Oscillation (AO) and the Annual Pollen Index (API), the start, the end and the length of the pollination seasons of 22 taxa collected at 6 aerobiological stations in Catalonia during the 18 years-period 1994-2011 have been computed. In addition, daily back-trajectories cluster analysis has been carried out in order to determine the influence of climatic indices on the main atmospheric transport routes frequencies and the long range pollen transport. Our aim is to determine the respective vulnerability of taxa to climate variability, taking also into account the pollen provenance area. Climatic indices showed significant negative correlations with the parameters API (except for Corylus) and pollination start (except for Ambrosia, Castanea, Fagus and Betula, the latter being Eurosiberian taxa often long range transported) of most taxa, while significant positive correlations with the end of the pollination period of most taxa. The most vulnerable taxa (more significant correlations) with regard to API were Corylus, Olea, Platanus and Quercus deciduous type.
CitationAlarcon, M. [et al.]. Relationship between climate variability indices and airborne pollination in Catalonia (NE Iberian Peninsula). A: Meeting of the European Aeroallegen Network and the European Aerobiology Society EAN-EAS. "Meeting of the European Aeroallergen Network and the European Aerobiology Society". Viena: 2014, p. 30.
URIhttp://hdl.handle.net/2117/27348
Publisher versionhttps://www.dropbox.com/s/ptunn00k8tfz741/Abstracts%20book_%20EAN%20EAS%20Meeting%202014.pdf?dl=0
Collections
Share: