Maxent as an inevitable force in cell differentiation 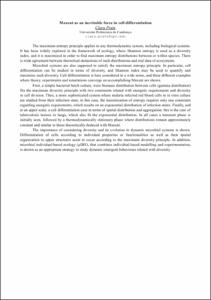 Maxent as an inevitable force in cell differentiation.pdf (986,6Kb)
Share:

The maximum entropy principle applies to any thermodynamic system, including biological systems. It has been widely explored in the framework of ecology, where Shannon entropy is used as a diversity index, and it is maximized in order to find maximum entropy distributions between or within species. There is wide agreement between theoretical deductions of such distributions and real data of ecosystems. Microbial systems are also supposed to satisfy the maximum entropy principle. In particular, cell differentiation can be studied in terms of diversity, and Shannon index may be used to quantify and maximize such diversity. Cell differentiation is here considered in a wide sense, and three different examples where theory, experiments and simulations converge on accomplishing Maxent are shown. First, a simple bacterial batch culture, were biomass distribution between cells (gamma distribution) fits the maximum diversity principle with two constraints related with energetic requirements and diversity in cell division. Then, a more sophisticated system where malaria infected red blood cells in in vitro culture are studied from their infection state; in this case, the maximization of entropy requires only one constraint regarding energetic requirements, which results on an exponential distribution of infection states. Finally, and at an upper scale, a cell differentiation case in terms of spatial distribution and aggregation; this is the case of tuberculosis lesions in lungs, which also fit the exponential distribution. In all cases a transient phase is initially seen, followed by a thermodynamically stationary phase where distributions remain approximately constant and similar to those theoretically deduced with Maxent. The importance of considering diversity and its evolution in dynamic microbial systems is shown. Differentiation of cells according to individual properties or functionalities as well as their spatial organization in upper structures seem to occur according to the maximum diversity principle. In addition, microbial individual-based ecology (µIBE), that combines individual-based modelling and experimentation, is shown as an appropriate strategy to study dynamic emergent behaviours related with diversity.
CitationPrats, C. Maxent as an inevitable force in cell differentiation. A: BCAM Workshop on Nonlinear Dynamics in Biological Systems. "1st BCAM Workshop on Nonlinear Dynamics in Biological Systems - BOOK OF ABSTRACTS". Bilbao: 2014, p. 24.
URIhttp://hdl.handle.net/2117/27335
Publisher versionhttp://www.bcamath.org/documentos_public/archivos/actividades_cientificas/Book_of_abstracts1-2.pdf