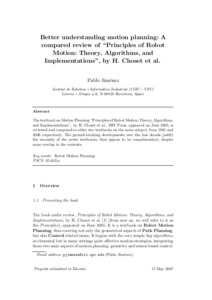 Document typeArticle
PublisherElsevier
Rights accessOpen Access
Abstract
The textbook on Motion Planning “Principles of Robot Motion: Theory, Algorithms, and Implementations”, by H. Choset et al., MIT Press, appeared on June 2005, is reviewed and compared to other two textbooks on the same subject, from 1991 and 2006 respectively. The ground-breaking developments over the last decade justify the necessity of the newer textbooks, that appear to be complementary, despite some overlap in the contents.
CitationJiménez, Pablo. "Better understanding motion planning: A compared review of “Principles of Robot Motion: theory, algorithms, and implementations”". Computer science review, 2007, vol. 1, núm. 1, p. 67-72.
URIhttp://hdl.handle.net/2117/2729
ISSN1574-0137
Publisher versionhttp://dx.doi.org/10.1016/j.cosrev.2007.06.001
Collections
Share: