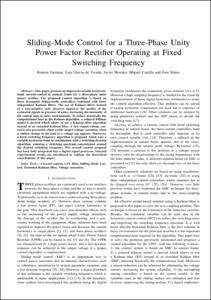 Document typeArticle
Rights accessOpen Access
All rights reserved. This work is protected by the corresponding intellectual and industrial property rights. Without prejudice to any existing legal exemptions, reproduction, distribution, public communication or transformation of this work are prohibited without permission of the copyright holder
Abstract
This paper presents an improved variable hysteresisband current-control in natural frame for a three-phase unity power rectifier. The proposed control algorithm is based on three decoupled sliding-mode controllers combined with three independent Kalman filters. The use of Kalman filters instead of a non-adaptive state observer improves the quality of the estimated signals in presence of noise, increasing the immunity of the control loop in noisy environments. To reduce drastically the computational load in the Kalman algorithm, a reduced bilinear model is derived which allows to use a Kalman filter algorithm instead of an extended Kalman filter. A fast output-voltage control is also presented which avoids output-voltage variations when a sudden change in the load or a voltage sag appears. Moreover, a fixed switching frequency algorithm is proposed which uses a variable hysteresis-band in combination with a switching decision algorithm, ensuring a switching spectrum concentrated around the desired switching frequency. The overall control proposal has been fully integrated into a digital signal processor. Selected experimental results are introduced to validate the theoretical contributions of this paper.
CitationGuzman, R. [et al.]. "IEEE transactions on power electronics". 11 Febrer 2015.
URIhttp://hdl.handle.net/2117/27273
DOI10.1109/TPEL.2015.2403075
ISSN0885-8993
Publisher versionhttp://ieeexplore.ieee.org/xpl/articleDetails.jsp?tp=&arnumber=7039217&matchBoolean%3Dtrue%26searchField%3DSearch_All%26queryText%3D%28%28guzman%29+AND+morales%29
Collections
Share: