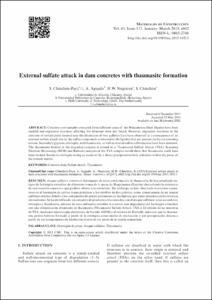 Nugteren, H. W
Chinchón Yepes, Jose Servando
Document typeArticle
PublisherInstituto Técnico de la Construcción y del Cemento
Rights accessOpen Access
Abstract
Concrete core samples extracted from different areas of the Mequinenza Dam (Spain) have been studied and expansive reactions affecting the structure were not found. However, expansive reactions in the concrete of certain parts located near the abutments of two galleries have been observed as a consequence of an external sulfate attack due to the sulfur compounds contained in the lignites that are present on the surrounding terrain. Secondary gypsum, ettringite, and thaumasite, as well as several sulfate efflorescence have been detected. The thaumasite formed in the degraded concrete is related to a Thaumasite Sulfate Attack (TSA). Scanning Electron Microscopy (SEM) and Rietveld analyses of the TSA samples would show that thaumasite could have been formed thanks to ettringite acting as nuclei or by a direct precipitation from solutions within the pores of the cement matrix.
CitationChinchón, S. [et al.]. External sulfate attack in dam concretes with thaumasite formation. "Materiales de construcción (Madrid)", Gener 2015, vol. 65, núm. 317.
URIhttp://hdl.handle.net/2117/27227
DOI10.3989/mc.2015.10513
ISSN0465-2746
Publisher versionhttp://materconstrucc.revistas.csic.es/index.php/materconstrucc/article/viewArticle/1679
Collections
Share: