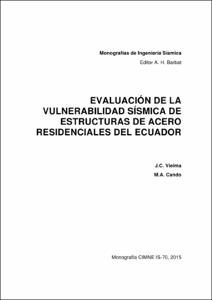 Document typeBook
PublisherCentre Internacional de Mètodes Numèrics en Enginyeria (CIMNE)
Rights accessOpen Access
Abstract
Nowadays, there are a large number works focused on determining the seismic vulnerability of structures. This feature is not accidental, but rather the product of concern to the scientific, professional and organizations responsible for risk management community to reduce the destructive effects caused by earthquakes in the infrastructure and society. Globally destructive events that have occurred during the previous and present decades have contributed to this initiative; among them, the Sichuan, China (2008), Port au Prince, Haiti (2010), Maule, Chile (2010) or Tohoku, Japan (2011) earthquakes can be mentioned, which had as consequences many dead, injured and homeless people. It is well known that an earthquake can cause humanitarian disasters not only by the number of casualties and injured people but also for the destruction of cities where thousands of families live and work. All the above mentioned reasons reveal the need of revision and improvement of the seismic design codes, construction practices and policies that allow buildings to have a better performance against the strong ground motions. This is the context in which this work was developed. It contains results of a research entitled
CitationVielma, J.; Cando, M.A. "Evaluación de la vulnerabilidad sísmica de estructuras de acero residenciales del Ecuador". Barcelona: Centre Internacional de Mètodes Numèrics en Enginyeria (CIMNE), 2015. ISBN 978-84-943928-1-8.
URIhttp://hdl.handle.net/2117/27214
DLB-9282-2015
ISBN978-84-943928-1-8
Publisher versionhttp://www.cimne.com/tiendacimne/mono.asp?id_prod=2006
Collections
Share: