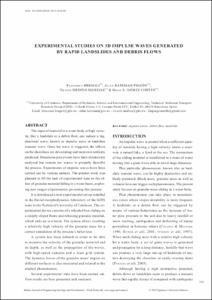 Gómez Cortés, Diego
Document typeConference lecture
Rights accessOpen Access
Abstract
The input of material in a water body at high velocity, like a landslide or a debris flow, can induce a big, abnormal wave, known as impulse wave or landslide tsunami wave. Once the wave is triggered, the effects on the shorelines are devastating and moreover unlikely predicted. Disastrous past events have been extensively analysed but remain too scarce to properly describe the process. Experiments of impulse waves have been carried out by various authors. The present work was planned to fill the lack of experimental data on the effect of granular material falling in a water basin, exploring new ranges of parameters governing this process. It is introduced a new experimental set up installed in the fluvial-morphodynamic laboratory of the GITS team in the Technical University of Catalonia. The experimental device consists of a wheeled box sliding on a steeply sloped flume and releasing granular material, which ends up in a basin. The system allows reaching a relatively high velocity of the granular mass for a correct simulation of the process’s behaviour. A system has been defined in order to be able to measure the velocity of the granular material and its depth, as well as the propagation of the waves, with high-speed cameras and a laser grid system. The dynamic forces of the granular mass’ impact on different surfaces is also measured and related to the studied phenomenon. Several experiments’ runs have been carried out. First results are here presented and analysed.
CitationBregoli, F. [et al.]. Experimental studies on 3D impulse waves generated by rapid landslides and debris flows. A: International Conference on Vajont - 1963-2013. "International Conference on Vajont - 1963-2013. Thoughts and analyses after 50 years since the catastrophic landslide". Padua: 2013, p. 115-122.
URIhttp://hdl.handle.net/2117/27188
DOI10.4408/IJEGE.2013-06.B-08
ISBN978-88-95814-96-4
Publisher versionhttp://www.ijege.uniroma1.it/rivista/international-conference-on-vajont-1963-2013-thoughts-and-analyses-after-50-years-since-the-catastrophic-landslide/topic-1-triggering-failure-mechanics-and-kinematic-evolution/experimental-studies-on-3d-impulse-waves-generated-by-rapid-landslides-and-debris-flows/ijege-13_bs-bregoli-et-alii.pdf
Collections
Share: