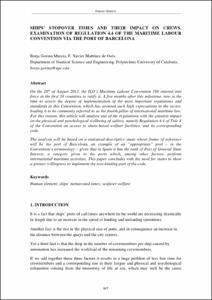 On the 20th of August 2013, the ILO’s Maritime Labour Convention 186 entered into force in the first 30 countries to ratify it. A few months after this milestone, now is the time to assess the degree of implementation of the most important regulations and standards in this Convention, which has aroused such high expectations in the sector, leading it to be commonly referred to as the fourth pillar of international maritime law. For this reason, this article will analyse one of the regulations with the greatest impact on the physical and psychological wellbeing of sailors, namely Regulation 4.4 of Title 4 of the Convention on access to shore-based welfare facilities, and its corresponding code. The analysis will be based on a statistical-descriptive study whose frame of reference will be the port of Barcelona, an example of an “appropriate” port – in the Convention’s terminology – given that in Spain it has the rank of Port of General State Interest, a category given to the ports which, among other factors, perform international maritime activities. This paper concludes with the need for states to show a greater willingness to implement the non-binding part of the code.
CitationGorina, B.; Martinez, F. J. Ships' stopover times & their impact on crews. Approach to regulation 4.4 MLC thorugh Port of Barcelona. A: International Conference on Maritime Transport. "Maritime transport VI: 6th International Conference on Maritime Transport: maritime transport'14". Barcelona: Iniciativa Digital Politècnica, 2014, p. 117-128.
URIhttp://hdl.handle.net/2117/27185
ISBN978-84-9880-483-6