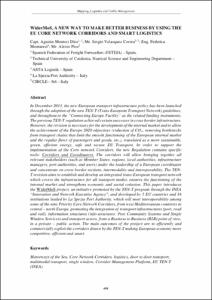 In December 2013, the new European transport infrastructure policy has been launched through the adoption of the new TEN-T (Trans European Transport Network) guidelines, and throughout to the “Connecting Europe Facility” as the related funding instruments. The previous TEN-T regulation achieved certain successes in cross border infrastructure. However, the revision is necessary for the development of the internal market and to allow the achievement of the Europe 2020 objectives (reduction of CO2, removing bottlenecks from transport chains that limit the smooth functioning of the European internal market and the regular flows of passengers and goods, etc.), translated as a more sustainable, green, efficient energy, safe and secure EU Transport. In order to support the implementation of the Core network Corridors, the new Regulation contains specific tools: Corridors and Coordinators. The corridors will allow bringing together all relevant stakeholders (such as Member States, regions, local authorities, infrastructure managers, port authorities, and users) under the leadership of a European coordinator and concentrate on cross border sections, intermodality and interoperability. The TENT revision aims to establish and develop an integrated trans-European transport network which covers the infrastructure for all transport modes, ensures the functioning of the internal market and strengthens economic and social cohesion. This paper introduces the WiderMoS project, an initiative promoted by the TEN-T program through the INEA “Innovation and Network Executive Agency”, and developed by 5 EU countries and 16 institutions leaded by La Spezia Port Authority, which will meet interoperability among some of the nine Priority Core Network Corridors, from west Mediterranean countries to central – north Europe, promoting the integration of transport infrastructures (port, road and rail), information structures (info-structures: Port Community Systems and Single Window Services) and transport actors, from a Business to Business (B2B) point of view, in a private – public action. The main outcomes of the project are to efficiently and commercially exploit the corridors drawn by the TEN-T making European economy more competitive, efficient and smart.
CitationVelasquez, S. [et al.]. WiderMoS, a new way to make better business by using the EU core network corridors and smart logistics. A: International Conference on Maritime Transport. "Maritime transport VI: 6th International Conference on Maritime Transport: maritime transport'14". Barcelona: Iniciativa Digital Politècnica, 2014, p. 489-500.
URIhttp://hdl.handle.net/2117/27180
ISBN978-84-9880-483-6