The effect of the economical crises of 2007 to the container shipping in Spain, Turkey and Greece 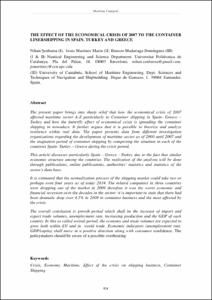 Except where otherwise noted, content on this work is licensed under a Creative Commons license : Attribution-NonCommercial-NoDerivs 3.0 Spain
Abstract
The present paper brings into sharp relief that how the economical crisis of 2007 affected maritime sector A-Z particularly in Container shipping in Spain- Greece – Turkey and how the butterfly effect of economical crisis is spreading the container shipping in nowadays. It further argues that it is possible to theorize and analyze resilience within real data. The paper presents data from different investigation organizations regarding the development of maritime sector as of 2000 until 2007 and the stagnation period of container shipping by comprising the situation in each of the countries Spain- Turkey – Greece during the crisis period. This article discusses particularly Spain - Greece - Turkey due to the fact that similar economic structure among the countries. The realization of the analysis will be done through publications, online publications, authorities’ statistics and statistics of the sector's data base. It is estimated that the normalization process of the shipping market could take two or perhaps even four years as of today 2014. The related companies in three countries were dropping out of the market in 2009 therefore it was the worst economic and financial recession over the decades in the sector; it is important to state that there had been dramatic drop over 4.5% in 2009 in container business and the most affected by the crisis. The overall conclusion is growth period which shall be the increase of import and export trade volumes, unemployment rate, increasing production and the GDP of each country. In this so called revival period, the economy and trade volumes are expected to grow both within EU and in world trade. Economic indicators (unemployment rate, GDP/capita) shall move in a positive direction along with consumer confidence. The policymakers should be aware of a possible overheating.
CitationSenbursa, N.; Martinez, J. The effect of the economical crises of 2007 to the container shipping in Spain, Turkey and Greece. A: International Conference on Maritime Transport. "Maritime transport VI: 6th International Conference on Maritime Transport: maritime transport'14". Barcelona: Iniciativa Digital Politècnica, 2014, p. 524-539.
URIhttp://hdl.handle.net/2117/27178
ISBN978-84-9880-483-6
Collections
Share: