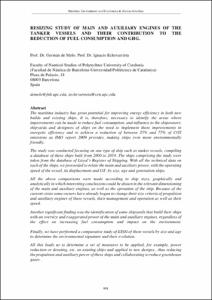 Document typeConference report
PublisherIniciativa Digital Politècnica
Rights accessOpen Access
Abstract
The maritime industry has great potential for improving energy efficiency in both new builds and existing ships. It is, therefore, necessary to identify the areas where improvements can be made to reduce fuel consumption, and influence to the shipowners, shipyards and designers of ships on the need to implement these improvements in energetic efficiency and to achieve a reduction of between 25% and 75% of CO2 emissions as IMO report 2009 provides, making ships even more environmentally friendly. The study was conducted focusing on one type of ship such as tanker vessels, compiling a database of these ships built from 2000 to 2014. The ships comprising the study were taken from the database of Lloyd´s Register of Shipping. With all the technical data on each of the ships, we proceeded to relate the main and auxiliary power, with the operating speed of the vessel, its displacement and GT, by size, age and generation ships. All the above comparisons were made according to ship sizes, graphically and analytically in which interesting conclusions could be drawn in the relevant dimensioning of the main and auxiliary engines, as well as the operation of the ship. Because of the current crisis some owners have already begun to change their size criteria of propulsion and auxiliary engines of these vessels, their management and operation as well as their speed. Another significant finding was the identification of some shipyards that build their ships with an oversize and exaggerated power of the main and auxiliary engines, regardless of the effect on increasing fuel consumption and impact on the environment. Finally, we have performed a comparative study of EEOI of these vessels by size and age to determine the environmental signature and their evolution. All this leads us to determine a set of measures to be applied, for example, power reduction or derating, etc. on existing ships and applied to new designs , thus reducing the propulsion and auxiliary power of these ships and collaborating to reduce greenhouse gases .
CitationDe Melo, G.; Echevarrieta, I. Resizing study of main and auxiliary engines of the tanker vessels and their contribution to the reduction of fuel consumption and GHG. A: International Conference on Maritime Transport. "Maritime transport VI: 6th International Conference on Maritime Transport: maritime transport'14". Barcelona: Iniciativa Digital Politècnica, 2014, p. 593-601.
URIhttp://hdl.handle.net/2117/27177
ISBN978-84-9880-483-6
Collections
Share: