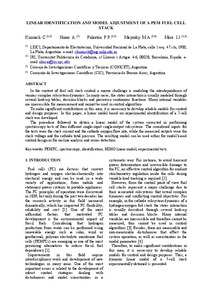 Kunusch, Cristian
Puleston, Paul
Mayosky, Miguel Á.
Moré, J.J.
Document typeArticle
PublisherElsevier
Rights accessOpen Access
All rights reserved. This work is protected by the corresponding intellectual and industrial property rights. Without prejudice to any existing legal exemptions, reproduction, distribution, public communication or transformation of this work are prohibited without permission of the copyright holder
Abstract
In the context of fuel cell stack control a mayor challenge is modeling the interdependence of various complex subsystem dynamics. In many cases, the states interaction is usually modeled through several look-up tables, decision blocks and piecewise continuous functions. Many internal variables are inaccessible for measurement and cannot be used in control algorithms. To make significant contributions in this area, it is necessary to develop reliable models for control and design purposes. In this paper, a linear model based on experimental identification of a 7-cell stack was developed. The procedure followed to obtain a linear model of the system consisted in performing spectroscopy tests of four different single-input single-output subsystems. The considered inputs for the tests were the stack current and the cathode oxygen flow rate, while the measured outputs were the stack voltage and the cathode total pressure. The resulting model can be used either for model-based control design or for on-line analysis and errors detection.
CitationHusar, Attila P.; Kunusch, Cristian; Puleston, Pablo F.; Mayosky, Miguel Á.; Moré, J.J.. "Linear identification and model adjustment of a PEM fuel cell stack". International journal of hydrogen energy, 2008, vol. 33, núm. 13, p. 3581-3587.
URIhttp://hdl.handle.net/2117/2715
ISSN0360-3199
Publisher versionhttp://dx.doi.org/10.1016/j.ijhydene.2008.04.052
Collections
Share: