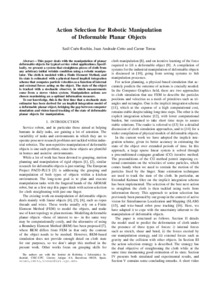 Document typeConference report
PublisherESF-JSPS
Rights accessOpen Access
Abstract
This paper deals with the manipulation of planar deformable objects for typical service robot applications. Specifically, we present a system that straightens pieces of cloth from any arbitrary initial wrinkle condition using a robotic manipulator. The cloth is modeled with a Finite Element Method, and its state is estimated with a physical-based implicit integration scheme that computes particle velocities as a function of internal and external forces acting on the object. The state of the object is tracked with a stochastic observer, in which measurements come from a stereo vision system. Manipulation actions are chosen maximizing an a-optimal information measure. To our knowledge, this is the first time that a stochastic state estimator has been derived for an implicit integration model of a deformable planar object, bridging the gap between computer simulation and vision-based tracking of the state of deformable planar objects for manipulation.
CitationCuén Rochín, Saúl; Andrade-Cetto, Juan; Torras, Carme. "Action selection for robotic manipulation of deformable objects". A: 2008 Frontier Science Conference Series for Young Researchers: Experimental Cognitive Robotics (FSCYR:ECR), Kanagawa, Japó, 2008. ESF-JSPS, 2008, p. 1-6.
URIhttp://hdl.handle.net/2117/2714
Collections
Share: