A relational positioning methodology for robot task specification and execution 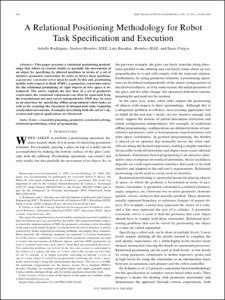 Document typeArticle
PublisherIEEE
Rights accessOpen Access
Abstract
This paper presents a relational positioning methodology that allows to restrict totally or partially the movements of an object by specifying its allowed positions in terms of a set of intuitive geometric constraints. In order to derive these positions, a geometric constraint solver must be used. To this end, positioning mobile with respect to fixed (PMF), a geometric constraint solver for the relational positioning of rigid objects in free space is introduced. The solver exploits the fact that, in a set of geometric constraints, the rotational component can often be separated from the translational one and solved independently. PMF may be used as an interface for specifying offline-programmed robot tasks, as well as for assisting the execution of teleoperated tasks requiring constrained movements. Examples describing both the solver’s operation and typical applications are discussed.
CitationRodríguez, Adolfo; Basañez, Luis; Celaya, Enric. "A relational positioning methodology for robot task specification and execution". IEEE transactions on robotics, 2008, vol. 24, núm. 3, p. 600-611.
URIhttp://hdl.handle.net/2117/2713
ISSN1552-3098
Publisher versionhttp://dx.doi.org/10.1109/TRO.2008.924263
Collections
Share: