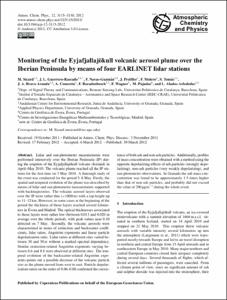 Lidar and sun-photometer measurements were performed intensively over the Iberian Peninsula (IP) during the eruption of the Eyjafjallajokull volcano (Iceland) in April–May 2010. The volcanic plume reached all the IP stations for the first time on 5 May 2010. A thorough study of the event was conducted for the period 5–8 May. Firstly, the spatial and temporal evolution of the plume was described by means of lidar and sun-photometer measurements supported with backtrajectories. The volcanic aerosol layers observed over the IP were rather thin (<1000 m) with a top height up to 11–12 km. However, in some cases at the beginning of the period the thickness of those layers reached several kilometers in Evora and Madrid. The optical thicknesses associated to those layers were rather low (between 0.013 and 0.020 in average over the whole period), with peak values near 0.10 detected on 7 May. Secondly, the volcanic aerosols were characterized in terms of extinction and backscatter coefficients, lidar ratios, Angstrom exponents and linear particle depolarization ratio. Lidar ratios at different sites varied between 30 and 50 sr without a marked spectral dependency. Similar extinction-related Angstrom exponents varying between 0.6 and 0.8 were observed at different sites. The temporal evolution of the backscatter-related Angstrom exponents points out a possible decrease of the volcanic particle size as the plume moved from west to east. Particle depolarization ratios on the order of 0.06–0.08 confirmed the coexistence of both ash and non-ash particles. Additionally, profiles of mass concentration were obtained with a method using the opposite depolarizing effects of ash particles (strongly depolarizing), non-ash particles (very weakly depolarizing), and sun-photometer observations. In Granada the ash mass concentration was found to be approximately 1.5 times higher than that of non-ash particles, and probably did not exceed the value of 200 µgm-3 during the whole event.
CitationSicard, M. [et al.]. Monitoring of the Eyjafjallajokull volcanic aerosol plume over the Iberian Peninsula by means of four EARLINET lidar stations. "Atmospheric chemistry and physics", 30 Març 2012, vol. 12, núm. 6, p. 3115-3130.
URIhttp://hdl.handle.net/2117/27126
DOI10.5194/acp-12-3115-2012
ISSN1680-7316
Publisher versionhttp://www.atmos-chem-phys.net/12/3115/2012/acp-12-3115-2012.html