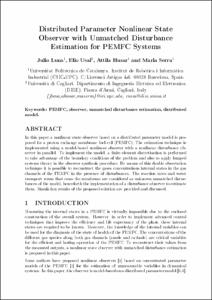 Document typeConference report
Rights accessOpen Access
ProjectPUMA MIND - Physical bottom Up Multiscale Modelling for Automotive PEMFC Innovative performance and Durability optimization (EC-FP7-303419)
Abstract
In this paper a nonlinear state observer based on a distributed parameter model is proposed for a proton exchange membrane fuel cell (PEMFC). The estimation technique is implemented using a model-based nonlinear observer with a nonlinear disturbance observer in parallel. To implement the model, a finite element discretisation is performed to take advantage of the boundary conditions of the problem and also to apply lumped systems theory in the observer synthesis procedure. By means of this double observation technique it is possible to reconstruct the gases concentrations internal states in the gas channels of the PEMFC in the presence of disturbances. The reaction rates and water transport terms that cross the membrane are considered as unknown unmatched disturbances of the model, henceforth the implementation of a disturbance observer to estimate them. Simulation results of the proposed solution are provided and discussed.
CitationLuna, J. [et al.]. Distributed parameter nonlinear state observer with unmatched disturbance estimation for PEMFC systems. A: International Conference on Fundamentals & Development of Fuel Cells. "Proceedings of the 6th International Conference on Fundamentals & Development of Fuel Cells". Toulouse: 2015, p. 1-8.
URIhttp://hdl.handle.net/2117/27119
Publisher versionhttp://fdfc2015-toulouse.org/
Collections
Share: