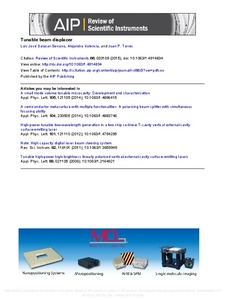 Document typeArticle
Rights accessOpen Access
Abstract
We report the implementation of a tunable beam displacer, composed of a polarizing beam splitter(PBS) and two mirrors, that divides an initially polarized beam into two parallel beams whose separation can be continuously tuned. The two output beams are linearly polarized with either vertical or horizontal polarization and no optical path difference is introduced between them. The wavelength dependence of the device as well as the maximum separation between the beams achievable is limited mainly by the PBS characteristics
CitationSalazar-Serrano, L.; Valencia, A.; Juan P. Torres. Tunable beam displacer. "AIP Review of Scientific Instruments", 17 Març 2015, vol. 86, p. 033109.
URIhttp://hdl.handle.net/2117/26977
DOI10.1063/1.4914834
ISSNPrint: 0034-6748 Online: 1089-7623
Publisher versionhttp://dx.doi.org/10.1063/1.4914834
Collections
Share: